In any list of all-time great South African fighters there is no doubt that Jake Tuli must be rated as the greatest flyweight of all time.
Jake became an overnight sensation when he stopped Teddy Gardner on September 8, 1952 to win the British Empire flyweight title – in his first fight in Britain. 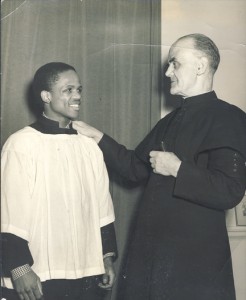 Gardner a veteran of 65 fights held the British, European and Empire flyweight
titles when he faced Tuli and after taking a beating from the South African he retired from the ring.
Jake whose birth name was N’Tuli was born to a Zulu father and a
Motswana mother on 7 July 1929 and was one of twelve children. His early years were spent in and around Fox Street where the family lived in the centre of Johannesburg.

In 1934 the government removed Jake’s family from the centre of Johannesburg
and dumped them in Orlando like thousands of others, outside one of the small houses that soon became known as matchboxes.

This is where Jake first attended school and being small was always a target for the bullies, so he turned to his half brother Johnny Mokoena for help. Johnny bought some secondhand boxing gloves and gave Jake boxing lessons until Andrew ‘Pele Pele’ Mkhwanazi, who later helped start Orlando Pirates football club took over his training.
Tuli was an alter boy at St Mary’s Anglican Church in Orlando and was encouraged
further by Father Lunnis the Parish priest to continue with his boxing.

After winning all of his estimated 25 amateur fights Jake made his professional debut in April 1950 at the Bantu Men’s Social Centre in Johannesburg in a ten round non-title fight against the South African flyweight champion
Jacob Thathe who fought under the name of Kid Snowball. Tuli stopped him the tenth round.
After winning five more fights Jake won the Transvaal flyweight title when he knocked out Gilbert Seabela in the first round and his next fight he
moved up a division to win the vacant South African bantamweight title in March 1952 when he knocked out Pancho Villa (a.k.a. Abednigo Mnguni) within forty seconds of the first round in Durban.

In May 1952 fighting at his natural weight Jake won the vacant South African flyweight crown when he defeated Kid Sweetie also called Young Sweetie with a tenth round stoppage. He made the first defence of his bantamweight title with a points win over Shaik Osman.
Jake’s step-brother worked for American Express and the manager at the time was George Crewe a keen fight fan who arranged for Jake to join the Jim Wicks stable in London. 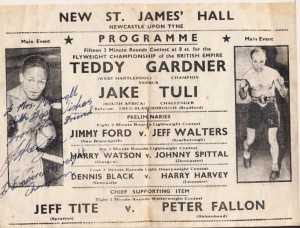 Teddy Gardner was looking for a so called easy fight so Wicks put him in with the experienced veteran and against the odds Tuli stopped him the 12th round. He only received R400 for the fight but gained instant recognition overnight. It was after this fight that Jake decided to box under the name of Tuli instead of N’Tuli, making it easier for the English to pronounce his name.
Only five weeks later he knocked out Jimmy Pearce and then in November 1952 outpointed Honore Pratesi, of France, in London. After the fight Pratesi collapsed and died two days later. The deeply religious Tuli wanted to pack his bags and go home, but Jim Wicks arranged for an Anglican priest, Father Royle to council him and between him and Wick’s they convinced Jake he was not responsible for
Pratesi’s death.

Only 27 days after the Pratesi fight Tuli fought Emile Delplanque in Nottingham and stopped him in the fourth.

Meanwhile Jim Wicks had arranged for Jake to meet top bantamweight and future
world champion, Frenchman, Robert Cohen on 14 December 1953 in Manchester. In a real slugfest Jake suffered his first defeat in the professional ring. However, the loss to Cohen did not affect his ranking as a flyweight and in August 1954 he went to Manilla to meet Leo Espinosa in what was regarded as a final eliminator for the world flyweight title held by Japan’s Yoshio Shirai.

The humidity in Manilla proved too much for Tuli and his corner had to pull
him out in the ninth round. Prior to this defeat Tuli had been ranked number one
contender by the Ring magazine, the only recognized ratings at the time, from August 1952 to March 1954. At the time there were only eight champions and ten contenders in each division. The champion Yoshio Shirai was reluctant to meet Tuli despite numerous challenges.

This defeat took a lot out of Tuli and in his next fight he lost his Empire flyweight title to Welshman Dai Dower over 15 rounds. He won his next fight against Henk van der Zee and then lost inside the distance to Nazzareno Gianelli.

In 1955 after good victories over Guy Schatt, Emile Delplanque and Ola Enoch
he made a terrific effort against Peter Keenan for the British Empire bantamweight
title in Glasgow before a crowd of 30 000 all rooting for the local boy.

Early in the first round he had Keenan down for a count of three and then sent
him down for the second time for a count of eight. Even though Keenan was badly punished for the next four rounds, the Scot managed to recover and knocked out Tuli in the fourteenth round.
He was beaten on points in a return bout with Dai Dower for the Empire flyweight
title in December 1955 and was then inactive for 22 months before returning
to the ring and losing three fights in a row. He announced his retirement in 1958 and decided to return to South Africa.
Jake was appointed as boxing correspondent for the Zonk magazine and wrote many thought provoking articles in his column called Neutral Corner.
In 1966 at the age of 37 Jake decided to make a comeback because he was not impressed with the current crop of fighters and felt he had the beating ofthem.

Jake had 8 fights wining three, losing four and drawing one and after losing to
Leslie Tangee on points in October 1967 he decided to hang up his gloves for
good.

After retiring from the ring Jake lived with his wife Peggy in Noordgesicht near Soweto and as a qualified printer worked at the World newspaper for many years.
In later years Jake suffered from diabetes and lived on a disability pension.
Jake who had a career record of 31 wins, 14 losses and 2 draws was a pioneer in an era when black sportsmen were barely recognised and was always the perfect gentleman.
Jake died in Johannesburg on 24 November 1998, aged 68, after a long illness.