Home
Boxing News
They wasted their talent - by Terry Pettifer (Written by Terry in 2007 R.I.P)

They wasted their talent – by Terry Pettifer (Written by Terry in 2007 R.I.P) 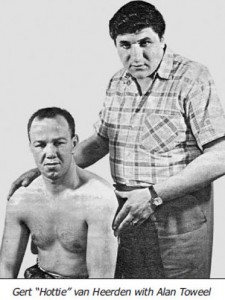 How many times haven’t you heard someone say, “He could have been great but he wasted his talent”? In the sport of boxing, we’ve come to appreciate the fact that some of the game’s most lavishly gifted athletes were never disciplined enough to fulfill their promise. Not that other sporting codes experienced less frustration.
Indeed bright lights and hard living have curtailed or damaged the careers of a staggering number of world class sportsmen, amongst them football legends like George Best, Diego Maradonna and Paul Gascoigne. In certain cases alcohol abuse was responsible for many of the pitfalls as too were fast cars, loose women and in more recent times, narcotics.
Did not the great George Best say, “I spent millions on booze and women and the rest I wasted!” One of the most brilliant instinctive footballers of all time, Best’s drinking binges became legendary and he was practically ‘washed up’ before he’d turned 30!
South African boxing has had a rollcall of talent squanderers and while they varied in terms of their ability, few were as tragic as former national middleweight and light heavyweight champion Gert “Hottie”van Heerden.
A wonderfully skilled southpaw, who defeated the likes of Mike Holt (three times), Ron Redrup, Earl Nikora, Del Flanagan, Teddy Haynes, Billy Lotter, Bronco Jones, Yvan Prebeg, Lou Guttierez, and Harry Scott amongst others.
Van Heerden was his own worst enemy and he had a number of serious run ins with the law and even went to prison for armed robbery.
Though Van Heerden attained a #2 world ranking as a light heavyweight during the 1960’s, a pair of near-fatal car accidents and years of hedonistic living, finally caught up with him and he was knocked out in two of his last three fights before retiring.
In an interview this writer had with him during the late 1970’s, Van Heerden confessed to many of his shortcomings. “As long as I had a few pound in my pocket so that I could go and drink, I was happy, and my trainer at the time Piet
Lourens had no hope of controlling me” The Victoria Hotel in Pretoria was one of Van Heerden’s favourite stamping grounds spots and he made no secret of the trouble he caused when socializing. In later years Van Heerden became a lay preacher and benignly lectured against the evils of alcohol.
Bennie Nieuwenhuizen is the choice of a number of experts as the finest welterweight ever to have been produced in this country, but even at the peak of his powers, the Belgravia left hooker had a decided preference for John Barleycorn and his trainer Cookie Mendoza lost count of the times he located Bennie in a suburban park sharing a bottle of wine with his side-kicks. During the Fifties, Nieuwenhuizen was regarded as a sure bet to at least win the Empire welterweight title, especially after he’d gone to Australia and beaten the champion George Barnes on points, but by the time he officially challenged Barnes for the title in Johannesburg (April 14, 1956), the freckle-faced South African had over a dozen summonses waiting for him at his home, and being ill-prepared, he was stopped in the 13th round.
“We never saw the best of Bennie” said the late Reg Haswell. “If he’d only lived clean he could have made it all the way to the top. Of that I have no doubt”.
Former SA middleweight and light heavyweight legend Mike Holt fought and lost to both Hottie van Heerden and Bennie Nieuwenhuizen, and at a function the former Pretoria panelbeater attended on the East Rand only months before his death, he told African Ring publisher Jeff Ellis and I that he considered Nieuwenhuizen the slightly better of the two. “Bennie could have been a word champion!” said Holt. “He had the finest left hand I’ve ever seen and he was perfectly balanced. The trouble with Bennie, though, was his care-free approach and total lack of dedication.”
Heavyweight magnet of the late Eighties, Johnny du Plooy had a wealth of promise and one of the sneakiest right hands in the business, but quite frankly Du Plooy was seldom 100% fit and after a meteoric rise to prominence, and victories over the likes of James “Quick” Tillis, James Broad, Mike Weaver and David Bey,
his playboy lifestyle got the better of him and when he challenged Italy’s Francesco Damiani for the WBO heavyweight title he was knocked out inside three rounds.
Former Empire flyweight champion Dennis Adams was undoubtedly one of the hardest pound-for-pound punchers ever produced in South Africa, but this pint-sized dynamo had an intense dislike of training and aside from his impressive dismantling of Frankie Jones for the Empire flyweight championship in 1957 and a 31 second blow-out of WBA world-bantamweight- champion-to-be Arnold Taylor, the fun-loving Adams lost almost as many fights as he won.

Dingaan Thobela won three world championships, yet everyone agrees that the once razor-sharp “Rose of Soweto” could have been genuinely great if only he learned the meaning of discipline. A WBO lightweight, WBA lightweight and WBC super middleweight champion, Thobela perfected the uppercut, and even at the tail-end of his career flaunted the punch with amazing accuracy and precision. “Dingaan hated training and had an ongoing battle with the scales” said former two-time world junior lightweight titleholder Brian Mitchell, who briefly trained Thobela. “Other than that, he was an incredibly gifted fighter and his uppercuts were as good as any boxer I’ve ever seen”.
Thobela’s championship attainments were stretched over a 10-year period (1990-2000) and most remarkably when he knocked out Britain’s Glen Catley to capture the WBC super middleweight crown in 2000, he became South Africa’s only fighter to win world titles in weight divisions so far apart…. 15 kg to be precise!
Harry Walker is a name foreign to modern day fans, but during the 1950’s, this Rosettenville lightweight was a firm crowd pleaser, and apart from his countless street fights, the fair-haired Walker swapped punches with two of the decade’s most memorable performers, former national lightweight kingpin Tony Habib –who
Walker knocked out without preamble, and ex-world bantamweight titleholder Vic Toweel, who defeated Walker after eight rounds in the Benoni wood-carver’s last professional contest.
Henry Speedie succeeded in winning the SA middleweight title during the 1950’s but experts agree that this sledgehammer-punching southpaw had the ability to have gone much further than he did. Speedie, who grew up in St Georges Home, was a natural hitter and his street fighting exploits were almost legendary. Alas, like so many fine talents, Speedie preferred partying to the rigors of the gymnasium and he eventually immigrated to Australia where he died a number of years back.
Mzukisi Sikali could thread a needle with his southpaw jab and was a splendid all-around fighter who won a number of Alphabet titles as a junior flyweight, junior bantamweight and flyweight. Yet Sikali was often unpredictable and his penchant for ‘painting the town red’ was an unconcealed fact that robbed him of more noteworthy acclaim than the brace of WBU and IBO titles he won. Then too, Sikali wasted most of his ring earnings by pursuing social pleasures, before eventually being murdered by thugs a stone’s throw from his home in Uitenhage.
Bruce McIntyre was a free-swinging national middleweight champion in the early 1980’s and remains one of the most courageous fighters that this country has ever known. Yet Bruce, who came from South Hills in the southern suburbs of Johannesburg, had a rather turbulent lifestyle that led to his ultimate downfall in the roped arena, which was hastened by “Mac The Knife’s” acknowledged love of alcohol.
Spider Kelly (real name George McKenzie) was a lanky belter who lifted the national welterweight title during the Sixties, but this multi-tattooed pugilist had a casual approach to training and notwithstanding his ability as a knockout artist, found the demands of his profession wholly less appealing than having a good time, which Kelly always ensured that he did. In fact on more than one occasion, Kelly was known to have consumed alcohol shortly before entering the ring.
Jimmy Abbott was one of the toughest heavyweights of the 1980’s and according to several pundits, Jeff Ellis among them, was one of the best punchers of his era. Unfortunately the jumbo-sized Abbott lacked the purposeful direction to live up to
expectations and despite knocking out Kallie Knoetze and twice outpointing Robbie Williams, the West Rand giant literally ‘ate himself’ out of serious contention at a crucial stage of his career. 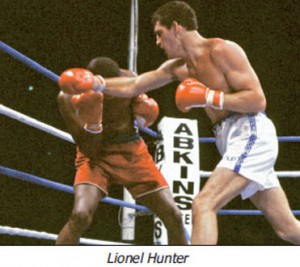 Lionel Hunter was one of the finest raw talents produced in the southern suburbs in years, yet after a number of good performances, in both the middleweight and light heavyweight divisions he seemed to lose the plot and never came close to fulfilling his ambitions. A fine boxer/puncher, Hunter succeeded, however, in fashioning some eye-catching wins over the robust punching Freddie Rafferty, Michael Motsoane, Martin Barnard, Prince Tukane and Sakkie Enslin, before retiring with a record of 12-5-1.
Because of space restraints it is impractical to name all the fighters who fall into the category of ‘talent wasters’, but how can we ever forget Hansie van Rooyen, a vicious punching bantamweight who gave Arnold Taylor such a torrid time, Wally Madley, a brilliant welterweight prospect who the late Maurice Toweel and former world light heavyweight champion Willie Pastrano felt was such a class act, Dawie du Preez, a lethal hitting light heavyweight who leveled mighty Mike Schutte in an astounding upset.
Self-sacrifice was low on all their agendas, and as such, they failed to reap the bounty that was theirs for the taking.