The Man who broke Ali’s jaw by Ron Jackson

Former WBC heavyweight champion Ken Norton Norton is best known for beating Muhammad Ali to win the NABF heavyweight title in their first bout in March 1973 and breaking his jaw during the fight. This was Ali’s second defeat having previously lost to Joe Frazier. 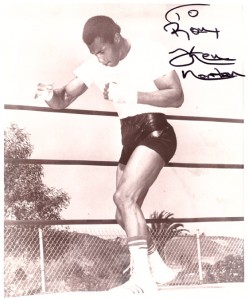 Six month later Ali avenged the loss to Norton and in their third match on September 28 1976 for the heavyweight title Ali beat him on a highly disputed decision. Ali had regained the world heavyweight title when he knocked George Foreman in the eighth round in 1974.
Ken was born on August 9 1943 in Jacksonville, Illinois and was an outstanding athlete at the Jacksonville High School and was also a member of the state football team.
He started boxing when he was in the United States Marine Corp from 1963 to 1967 and won three All-Marine heavyweight titles before joining the professional ranks in 1967.
In 1977 he beat Jimmy Young in a WBC eliminator with the winner to face WBC champion Muhammad Ali.
On February 15 1978 Ali lost the title to Leon Spinks and the WBC then ordered Spinks to defend against Norton.
However, Spinks decided to have a return fight with Ali which was more lucrative and as a result the WBC then decided to award the title to Norton because of his victory over Young.
In his first defence on June 9 1978 he lost the title to Larry Holmes in a classic 15 round fight.
He retired with a record of 42-7-1; 33 and was elected to the World Boxing hall of Fame in 1989 and inducted into the International Boxing Hall of Fame in 1992.
He also appeared in about 20 motion pictures.
In 1986 he was involved in a motor accident and was in coma for three weeks and only survived because of his terrific conditioning. It left him with a slow and slurred speech.
He once visited South Africa to open a gymnasium and I was privileged to meet him. On a photograph of us I look like a midget next to the tall and powerful former champion.