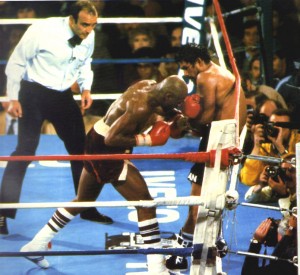 Christodoulou was handed the plum assignment, drawing praise for his handling of the frenzied 15-rounder at Caesars Palace in Las Vegas.
The contest ranks among the biggest of his career, but then the Alexis Arguello- Aaron Pryor and Tommy Hearns-Pipino Cuevas fights, both of which he refereed, were also in the league of superbouts.
The first was 1982’s Fight of the Year and again Christodoulou was praised for his perfectly-timed late stoppage.
Each time he was appointed in the ’80s he had to fight to keep the honour because of his South African passport. Pryor, a black man, said: ‘I judge a man on his reputation … I want Stan.’
Christodoulou always fought for nonracialism in boxing, but sometimes it was never enough.
Assigned to the Davey Moore-Duran bout on 16 June 1983 (the anniversary of the Soweto uprising), little was he to know what was to come. It was another famous bout at the iconic Madison Square Garden. As Christodoulou sat in front of Muhammad Ali, who was teasing him by blowing into the back of his head, the excitement heightened.
Then Christodoulou was told of demonstrations outside. Moore wanted to keep him as third man, but he was overruled. With 20 minutes to go, Christodoulou was thanked for his trouble and sent on his way.
Still immaculately dressed in his bowtie and boots, he trudged back to New York’s Waldorf Astoria. ‘Easily the low point of my career.’
Yet such dark moments were few. Christodoulou was to find himself in a few more classics yet. In 1994, he was third man in another Fight of the Year when Jorge Castro and John David Jackson produced a classic. Jackson pounded Castro throughout, but Christodoulou could still see the fire in his eyes and when Castro slammed home a crushing left hook in the ninth, he was vindicated.
‘Miracle in Monterrey’ blared the headlines.
So many more special moments rush through Christodoulou’s mind, a blend of fighters, celebrities, camera flashes and lights and music.
‘Nothing compares with a heavyweight superbout,’ he says. ‘All the stars come out to play. It’s very special.’ He’s admittedly had a few howlers. In 1986, on the undercard of Simon Skosana’s failed world title attempt at Rand Stadium, he copped one on the nose. Keeping his wits, he somehow stayed on his feet.
Years earlier, a mistimed shot by Mike Schutte landed on Christodoulou’s chest, but the referee was too busy warding off chaos – Kallie Knoetze was the opponent – to notice at the time. His body ached for days afterwards.
Approaching his seventh decade, Christodoulou might be slowing down. He doesn’t do roadwork nearly as much as he used to and the travel sometimes gets him down. But his excitement and enthusiasm is undiminished, his admiration for fighters unending.
‘I’ve been really lucky,’ he says from his home in Ballito on the KZN north coast. ‘I loved the sport as a child and it became my career. The places I’ve been, the people I’ve met … you can’t put a value on that. I’m very grateful.’ And so are we.
Van der Berg is communications manager for SuperSport, a former SAB Sports Writer of the Year and a regular contributor to Business Day Sport Monthly.