Hezekiel ‘King Kong’ Dlamini is best remembered as one of the tragic figures of South African boxing. A powerful, charismatic individual with definite promise as a fighter, he was in fact the first black South African heavyweight to achieve any degree of international exposure (albeit posthumously) due to the musical play based on the legend entitled ‘king Kong’

Mona Glasser who wrote the script, could not have captured the creed of Dlamini any better, than in the part of the song that went:
‘King Kong, right at the top man,
King Kong, never will fall
King Kong never will fall
King Kong, nothing can stop him.
That’s me, I’m King Kong.
Initially tipped as our first black heavyweight ’find’, the ill-fated the ill-fated Dlamini was by all accounts a morose, suspicious man with an ungovernable temper, and following a disastrous knockout defeat at the hands of a blown up middleweight named Simon ‘Greb’ Mthimkulu, he was never the quite the same either, emotionally or as a fighter.
Clearly for a man of Dlamini’s intense pride, the loss to a fighter much smaller and lighter than himself, had a devastating effect, and later, while working as a bouncer at a beer hall in Polly Street, Johannesburg, the former Natalian crossed swords with a notorious gang known as “the Spoiler”. At the time, Dlamini had already been arrested for manslaughter, following the death of a youngster he had hit.
Found ‘not guilty’ he resumed his activities at the Beer Hall, only to kill the gang leader of the Spoilers with that thugs own knife!
Acquitted on grounds of self-defense, Dlamini soon found out that the gang had vowed to kill him, and a girl called Maria Miya was detailed to betray him into their hands. A short while late, Dlamini, who suspected she would be a ‘Judas’ from the outset, stabbed Miya to death in the beer hall office, and was sentenced to 12 years imprisonment at Leeuwkop.
It was at this point that the former fighter confided in a friend that he no longer wanted to live, and on April 3, 1957 Dlamani’s body was found in the in the prison dam. Today the luckless Dlamini’s lies buried in a numbered grave in Croesus Cemetery, near Newclare. 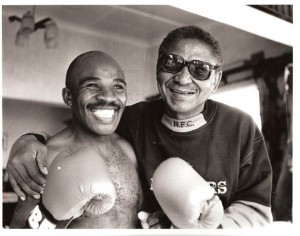 How good was Dlamini as a fighter? Veteran sportwriter , trainer and manager Theo Mthembu remembers him as a strong, incredibly fit man’ who drastically ‘pulled weight’ in order to fight Mthimkulu. He was as weak as a kitten at the time, and Mthimkulu managed to sling home a haymaker that knocked ‘King Kong’ cold! Mthembu recalled.
Anither elderly fight sage who knew well was former boxing writer Solly Mapanya. Speaking from his home in Vrede, Mapanya said “King Kong, as Dlamini was commonly known was a tough, competent fighter with real 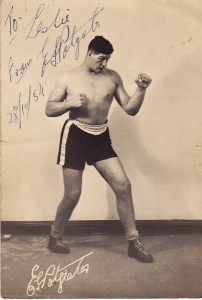 potential, and he even gave the huge Ewart Potgieter (who stood 7’2 and tipped the scales at a whopping 246 lbs) trouble in sparring.
Yes, he could have been developed into a very good fighter, and were he around today, he’d have made a lot of money, especially as a cruiserweight.”