Gloves have come a long way !

The search for the perfect boxing glove continues. But great progress has been made, thank goodness, since the day fighters did not wear gloves at all or spiked ones.
One of the most notable dates in the development of gloves, and the history of boxing, was September 7, 1892.

On the day in New Orleans, James J Corbett beat one of America’s most popular bare-knuckle fighters, John L Sullivan, for the heavyweight championship of the world. The historic and famous bout ended when Sullivan was knocked out in the 21st round.

The bout is remembered not only because of the sensational defeat of the popular and perceived “invincible” Sullivan, but also because it was the start of a significant change in the sport. It led to public approval of the use of gloves in heavyweight championship fights, ending the era of bare-knuckle fighting and of the mauling tactics seen in London prize-ring boxing.

The Queensberry Rules era arrived with that bout in New Orleans even though it was not the first major one to take place under those rules.
Corbett had beaten Jake Kilrain in six rounds on February 8, 1890, when they wore what the old-timers called mufflers. After Corbett’s victory, Sullivan announced that he would defend his title wearing “mitts” and that he would abandon the old style of bare-knuckle brawling. 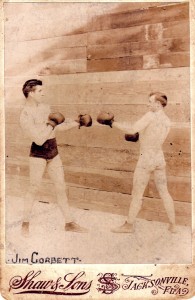 In an article for Ring magazine in 1939, famous American sportswriter AD Phillips wrote about Sullivan’s switch to gloves:
“Although Sullivan was the last connecting link between the bareknuckle period of pugilism under the London rules and the padded gloves period, and was a contestant in the last big battle on the turf under the London code, a large majority of the bouts in which he participated were with gloves.

“Sullivan’s fight with John Flood on a barge near Yonkers in 1881 was with skin-tight gloves and when Sullivan clashed with McCaffery at Cincinnati in 1885, the fighters wore one-ounce gloves.
“I saw most of his fights in this country and was able to make a close study of the Boston Strong Boy’s fighting qualities without gloves and with gloves of different weights.

“I think I can say without fear of contradiction that Sullivan was a greater, more powerful hitter with the gloves, skin tight or heavier, than with bare fists.
“Of the fifty or more bouts that Sullivan had fought during his career, only three were fought with the bare knuckles, one was with skin-tight gloves, and one with one-ounce gloves. All the rest were with gloves weighing two or more ounces.

“The preference shown by Sullivan for glove bouts is not difficult of explanation. Fighting with bare hands in those days was a prison offence, and it was therefore impossible to stage a bout in any place where the gate receipts could be depended upon. The fighters therefore had nothing to look forward to except glory and the amount of the side bet. “
The battle at the old Olympic Club in New Orleans contributed an important page to the annals of boxing. It gave boxing an air of respectability in the field of entertainment, for all classes and both sexes. 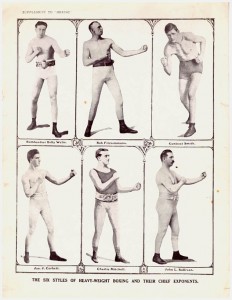 Gloves led to boxing becoming big business that culminated in multi-million dollar gates and in later years to television extravaganzas. Since their inception in about 1867, boxing gloves have undergone few basic changes, probably because of a lack of scientific research.

Boxing gloves or hand coverings actually date back to ancient Greece where different “hand coverings” were used at different times. Soft thongs were used before Homer’s time. The leather thongs were about three metres long and wound around the knuckles and wrist and lower forearm.

At about 400 BC a glove was made that may be regarded as the forerunner of the modern glove. It had a thick, hard bump over the knuckles. This was done to intensify the force of the punch; not to protect the fighters.

The Greeks later used sharp thongs with the intention of inflicting more injury and the Romans even went a step further and made a glove more dangerous by introducing the caestus’, which eventually ended up with spikes over the knuckles.

After the decline of the Roman Empire, little was recorded of boxing until the beginning of the bare-fisted era.

At present the modern rules stipulate different weights for gloves, depending on the weight of the boxers but the general shape and material have remained the same since the beginning of the modern era in boxing. For many years, horsehair was used for padding gloves, with the thumb housed in a separate unit.

This was generally accepted but unsatisfactory because the padding hardened during fights and could be dislodged by unscrupulous corner men.

The thumb was also a cause for concern because it was often forced away from the rest of the fist as a blow was landed, leading to injury. Some manufacturers later tried to build a small padded extension from the main part of the glove and this type is generally used around the world today.

However, medical men are still not satisfied that this is the answer. Various attempts have been made to modify the gloves, even to the extent of introducing thumb-less gloves, with the thumb portion attached to the glove.

In recent times, manufacturers have taken advantage of modern technology by using closed-cell foam for padding, which provides better protection than the earlier padding.

Boxers tend to have their own preference for gloves made by different manufactures. Some, for example, claim that Reyes gloves are the most comfortable; others swear by Everlast. 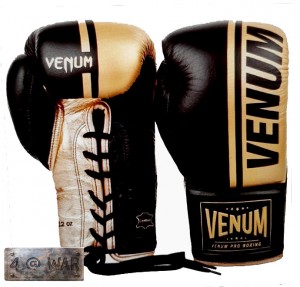 Despite claims that some makes of gloves cause cutting and others offer inadequate protection there is no doubt that modern gloves have come a long way since the frightening caestus used in Roman times.

But there is still room for improvement. Considering the advances in modern technology and science, it seems strange that no one has produced the “perfect” boxing glove.