Don McCorkindale, the first SA heavyweight to be world rated by Ron Jackson

In the days when there were only eight weight divisions in world boxing South Africa’s Don McCorkindale was listed as the No 5 heavyweight by The Ring magazine, which were the only recognised world ratings in boxing, and not like today where there are multiple world boxing organisations listing their own set of ratings and champions.
His No 5 rating in 1933 was the highest international rating to be given to a South African heavyweight until Gerrie Coetzee and Kallie Knoetze around 50 years later. 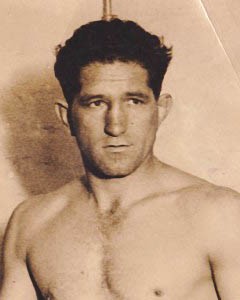 Born Donald Dinnie McCorkindale in Pretoria on 16 August 1904, as a teenager he was a good football player and swimmer but one of his colleagues at work persuaded him to spar at the Railway Institute in Struben Street, Pretoria.
He went on from there to an outstanding amateur career, winning several South African championships in the light heavyweight and heavyweight divisions.
In 1926 he fought in the British Amateur Boxing Association championships at the Albert Hall in London and scored three wins on the same day to take the light heavyweight title.
He then competed in the 1928 Olympics in Amsterdam and finished fourth in the light heavyweight class losing to Karel Miljon of Holland in a box-off for the bronze medal.
Don captained the Springbok team consisting of Harry Isaacs, Buddy Lebanon, Alfred Wilson, Robert Smith, Fred Ellis, Lennie Hall, and C. Bissett, who was mentioned in the team but there is no record of him taking part.
With nothing more to prove as an amateur, Don made his professional debut at the Johannesburg City Hall on 17 November 1928 with a second-round knockout over Alec Storbeck.
He then suffered his first defeat as a pro in his third fight against Michel Maurer, after piling up the points even though he had broken his hand, before the chairman of the Transvaal Boxing Board of Control Major Walter Wilkinson noticed that he was only using his left hand and ordered the referee to stop the fight in the tenth round and declare the Frenchman the winner.
Returning to action he won his next two fights before scoring a fifth-round stoppage win over Johnny Squires for the South African heavyweight title on 10 May 1930.
After a four-fight series with Joe Woods, winning one, losing two and fighting to a draw he resigned from his job and joined Woods on a boat to England.
In his first fight on 24 August 1931, he stopped Jack Stanley in three rounds at the Granby Hall in Leicester.
He won his next two fights before fighting to a 15-round draw against Larry Gains (75-11-3) on 28 January 1932 in a challenge for the British Empire heavyweight title.
Meeting some of the best heavyweights around at the time he lost to future world heavyweight champion Primo Carnera on points.
EPIC ENCOUNTER AND RAINSTORM IN SOUTH AFRICA
Tiny Dean the matchmaker of The National Sporting Club in South Africa then offered Don a fight against William “Young” Stribling of America.
Stribling, 27, was one of the six best heavyweights in the world at time and a veteran of 270 fights. He had lost in a challenge to Max Schmeling on a stoppage with only 14 seconds left in the last round.
The fight took place at the Ellis Park Rugby Stadium in Johannesburg on 17 December 1932 and created tremendous interest with ringside seats costing six guineas, which was the equivalent to a months’ pay at the time.
As the spectators began moving into the stadium there were heavy rolls of thunder, and the rain came crashing down.
There was no canopy over the ring and the canvas became completely sodden and it was obvious that McCorkindale and Stribling could not fight on such a surface. 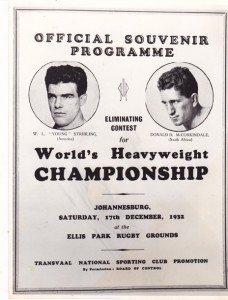 The rain had stopped when one of the ringside helpers was sent to a nearby butcher shop to fetch some sawdust.
He returned with several buckets of sawdust and spread it around the ring canvas, but ringsiders shrieked in disgust as entrails, slivers of bone and bits of meat were seen sticking out all over.
The fight, which was filmed by African Mirror turned out to be a poor spectacle over 12 rounds, with Stribling receiving the decision and jeered by the crowd on his way back to the dressing room.
McCorkindale was unhappy with the decision and some of his remarks upset the Transvaal Boxing Board of Control and they stripped him of his South African title
He returned to England and fought against Walter Neusal (d12 and w disq 8), Larry Gains (ko 10), Vincent Howen (w 12) and Paulino Uzcudan (l 10).
OFF TO AMERICA
McCorkindale then travelled to America and in his first fight on 10 September 1933 at Madison Square Garden in New York he beat Patsy Perroni on a majority ten-round points decision and then lost to King Levinsky on points.