The first national title fights between black and white South Africans took place in November 1976, a month after permission for “multiracial” boxing at all levels was granted by the government.

Since then, the number of black boxers in South Africa has grown markedly.

Boxing among black South Africans had been poorly documented before the Second World War but their interest in and enthusiasm for the sport certainly took off after the war.

It is possible that talented black boxers never received the recognition they deserved during the early part of the 20th century.

Evidence exists that boxing came to South Africa during the first British occupation of the Cape in 1795.

Bouts were conducted under the London Prizing Rules for nearly a century. Illegal bare-knuckle fight-to-a-finish was, apparently, common at military camps in Cape Town and along the Eastern Cape frontier.

One of the earliest references to “boxing” in South Africa was made in a report of the arrest of two men, named as Japie and Mahmoud, after a fight in Cape Town in the early 1860’s.

The date of the first organized bout in South Africa is impossible to pinpoint. There were public fights in King William’s Town in the 1860’s but they were probably little more than bare-knuckle brawls between soldiers.

Confirmation of these bouts came from newspapers in which disapproving editors sometimes referred to the events.

Interest in boxing increased after the discovery of diamonds in Kimberley and gold on the Witwatersrand. Among the fortune seekers were foreigners who were acquainted with bare-knuckle fights.

The Lawyer who had the law changed

Efforts to legalize it as a sport began in 1918, when Ludwig Japhet, who had a law practice in Johannesburg and a passion for boxing, began working on plans to change the status quo.

Assisted by friends, he drafted a bill and persuaded George McAllister, the Member of Parliament for Germiston, to present it to Parliament in 1923. It was adopted and the relevant act promulgated.

Few blacks took to boxing but Indians and “coloureds” did in significant numbers.

Fights between black and white South Africans at all levels became legal in October 1976. However, there were still black and white champions, in addition to the all-SA or Supreme Champions.

In the 1940’s and 1950’s there was an abundance of talented black light weights, but not enough tournaments to keep them active. 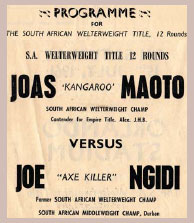 Two of the best light weights in SA boxing history were Elijah “Ellis Brown” Mokone and Enoc “Schoolboy” Nhlapo, who would have held their own in any era. 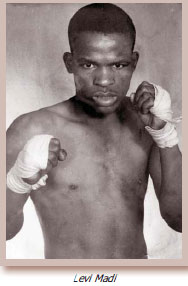 Tuli fought David Gogotya, Pancho Villa and Epraim Bohata as a bantam weight but his performances must be rated as a fly weight and he must rank as the best fly weight in SA boxing history.

After winning the SA title, he beat Teddy Gardner of Britain to win the British Empire fly weight title. It made him the first black South African to hold an Empire title.

He also fought abroad, taking on the best in the world. For two years he was ranked the no 1 fly weight in the world by The Ring Magazine, the only recognized compiler of ratings at the time.