10 April 2021
One of South Africa’s better heavyweights, Bennie Knoetze, who fought as a professional from March 1980 to September 1987, was killed in an accident while driving his scooter near Reitz in the Free State on Friday. He was 61.
Evidently, he enjoyed the exhilarating feeling of driving his beloved Vespa scooter with other friends from the club. He was born on 20 June 1959 and named Barend Mattheus but was known as “Bennie”.
Bennie joined the police force soon after leaving school and became a career policeman before he retired recently.
As an amateur, he won the South African heavyweight title in 1979 and then made his pro debut on 8 March 1980 with a four-round points win over Timothy Zwane. He was also a good rugby player.
After winning on his debut, he racked up an impressive number of victories all inside the distance, except for the first fight against Caiphus Masondo (pts 4).
The inside-the-distance victories came against Sophonia Naile, Timothy Zwane, Caiphus Masondo (tko 3), Gerrie Schnieganz, Gary Webb, James Dixon (USA), Jerry Shezi, Raymond White (USA), Terry O’Connar (England), Steve Mormino (England), Robbie Williams (who would go on to win the South African heavyweight title) and Stewart Lithgo ( England – Wpts 8).
After this impressive run, he suffered his first loss when he was stopped on a second technical knockout by the experienced American Mike Koranicki (26-8-2).
Benny then went on another unbeaten streak before he met Pierre Coetzer (9-1) in a clash for the vacant South African heavyweight title at the Ellis Park Tennis Stadium in Johannesburg on 22 September 1984.
The SA Boxing World magazine of November 1984 described the fight as follows: “In one of South Africa’s most sensational fights, Pierre Coetzer, the young Pretoria policeman, confounded the critics when he came back from the brink of defeat to suddenly unleash a barrage of lefts and rights to the head in the third round to stop fellow policeman Bennie Knoetzer for the vacant South African heavyweight title.”
Coetzer made an incredible comeback after being bombarded with rights and lefts from the southpaw Knoetze for the first two rounds and part of the third round.
Knoetze, who had a 9kg advantage, launched a furious onslaught from the first bell. This was against expectations. Bennie crowded the unsuspecting Coetzer and shook him with solid left hooks. At the end of the round, Coetzer was bleeding from small cuts on both eyes.
Midway through the second round, Knoetze put Coetzer on the canvas with a looping right for the mandatory eight count. When Coetzer got up, Bennie went in for the “kill” and sent him down again from a left hook. It looked as if the end was near, but Coetzer beat the count.
The third round started off with Knoetze again applying pressure for the first two minutes, and Coetzer looked in a bad way. He appeared to have little hope of lasting out the fight.
But Coetzer was a puncher and caught Knoetze, who appeared to be tiring with a straight right in his tracks. Shortly after this, Coetzer landed a short right flush on the jaw, and it was all over the minute he hit the canvas. Knoetze made it to his feet at the count of eight but was staggering to his corner and clearly in no condition to continue as referee Jules van den Hoogen continued to count Knoetze out on his feet.
This contest was the 1984 King Korn/SA Boxing World Fight of the Year for 1984. 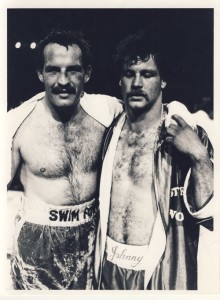 Knoetze won his next five fights which included winning the vacant Transvaal heavyweight title against Siza Makathini (pts 10) and, in a return match with Makathini, he stopped him in the eighth round.
Bennie had two fights after this: a win over Sammy Scaff (rtd 6) and his last fight on 12 September 1987, when he was knocked out in the first round by Johnny Du Plooy (15-0) to finish with a record of 25-3; 17.
supersport.com