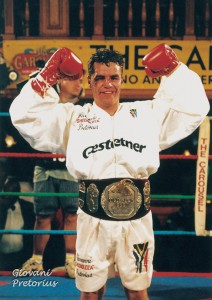 After an absence of 32 years due to the local Governments policies South Africa was readmitted to the Olympics and there were great expectations for Pretorius at welterweight and the flyweight Twala.
Sadly, they both lost their first fights, Pretorius to Sweden’s Soeren Antman who stopped him in the third round and Twala who was beaten on points by Rafael Lozano Munoz of Spain.
On his return from the Olympics Giovanni joined the professional ranks and won on points over four rounds against Thomas Mnisi at the Nasrec Indoor Arena on 18 November 1992.
Fighting in the junior middleweight division he made an impressive start to his career and remained unbeaten with one draw and five wins.
He was awarded the King Korn/Boxing World Prospect of the Year in 1993 and remained unbeaten in his next eight fights which included wins over former South African welterweight champion Gorilla Siswana and Nestor Tobius.
On 15 April 1996 he won the South African middleweight title with a sixth-round knockout victory over Simon Maseko and then scored a fourth-round knockout win over South African junior middleweight and future IBO middleweight champion Mpush Makambi.
CHALLENGE FOR WBC SUPER MIDDLEWEIGHT BELT
After this impressive start to his career, he was offered a fight against England’s Robin Reid for the WBC super-middleweight belt in London on 10 February 1997.
Fighting out of his weight division Reid floored him three times in the seventh round to score a technical knockout victory in the first defence of his belt. Pretorius was completely outclassed also being knocked down in first and fifth rounds.
After this setback he won his next six fights before losing the South African middleweight title to Johnson Tshuma on a tenth-round retirement at the Carousel Gambling Resort in Hammanskraal on 28 August 1999.
This was his last fight last fight and retired with an impressive record of 28-2-1; 24. 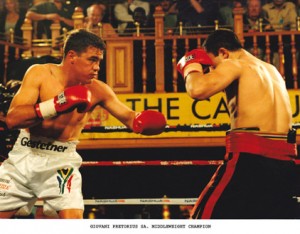 Giovanni was an exciting fighter, but his biggest problem was that once he climbed into the he forgot his boxing skills and liked to rumble.
By Ron Jackson
supersport.com