One of the most exciting heavyweight contenders of the 1980’s, was the big punching Ron Ellis, of Mayfair. Younger brother to another gutsy heavyweight prospect; Jeff Ellis, the trigger-fisted Ron had 23 bouts as a professional, winning 16 (11 by knockouts), losing 6 and drawing 1. 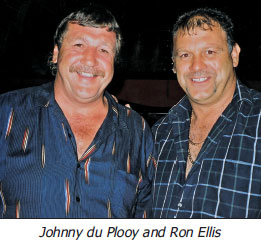 Ellis’ lightning-fast “blow out” of southpaw Louie Hendriks was especially noteworthy, because numerous pundits at the time were predicting that the smooth-boxing Free Stater had the makings of a champion.

Eager to fight anyone who would climb into the ring with him, Ron was a true crowd pleaser and his booming right hand came within a whisker of winning him the vacant SA heavyweight title on December 19, 1983, when he fought the lion-hearted Robbie Williams in Durban. Unfortunately for Ellis, after dropping Williams with his signature punch, Ron appeared to run out of steam and he was stopped
in the 5th round of a slam-bang fight. “Ellis simply ran out of gas” said veteran 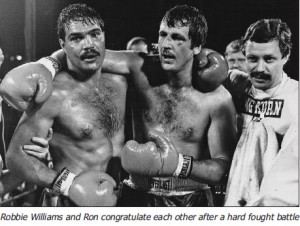 sportswriter Paul Hetz. “Ron would have stood a far better chance of winning (the
fight) if only he trained harder for what could have been his big break as a professionall”.

However, Ellis bounced back to win 5 and draw 1 of his next half-a-dozen bouts, beating Jerry Shezi (W TKO 10), Gary Webb (W TKO 2), and Njimoyi Chaka Sokhela (W KO 4), before traveling to Britain, where he halted Barry Ellis in the 3rd round.

On his return to South Africa, however, he flattered to deceive by boxing to a draw with the equally savage punching Hannes van der Berg, before returning to the UK and besting Derek Williams on points over eight heats.

While still abroad, he lost an 8-round nod to Funso Banjo of Nigeria, and in his next outing, more than four months 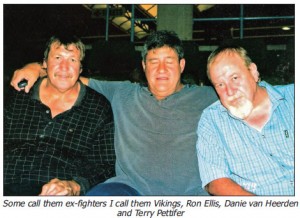 later, he was halted by sensational heavyweight newcomer Johnny du Plooy in the second round of their punch-up in Durban, on April 2, 1986. Thereafter, Ron had a lengthy break from the sport; almost four years in fact, before returning to flatten Muziwenkosi Mchunu via a 1st round knockout, on March 5, 1990 in Durban.

By then disenchanted with the rigours of training, Ellis looked decidedly jaded when he lost a 4-round decision to Themba Msweli in June 1990, and wisely decided to retire from the sport. Ellis’ passion for the sport though, has never dwindled, and he regularly attends tournaments, sometimes in the company of his brother Jeff. 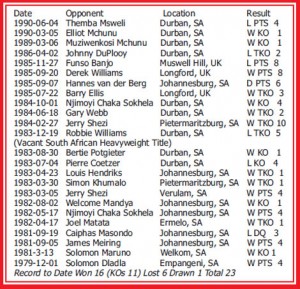