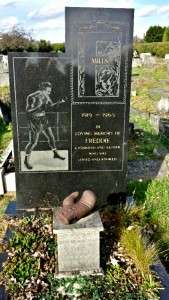 In the Honor Oak Cemetery in Camberwell in the London borough of Southwark is a grave of a man who shot himself.
It is the resting place of a man who used to be lion-hearted boxer. He
was a world champion and once beat Johnny Ralph in Johannesburg.
I went to see the grave on a recent visit to London and stood there thinking about the day, 66 years ago, when I met Freddie Mills.
It was November 1948, and I cycled from Germiston to the Clonmel Kennels near Johannesburg to watch Freddie Mills train for his fight against Johnny Ralph.
The kennels were owned by Reg Haswell, and provided accommodation for dogs that were used for greyhound racing before the sport was
banned in South Africa. Haswell, later a leading figure in SA boxing, also held tournaments on the property.
After Mills had finished training I took the vest that he had taken off and left near the ring into the room where he was cooling down. That was when I, a boxing-mad boy, had a chat with the famous Freddie Mills.
Frederick Percival Mills was born in Parkstone, a suburb of
Bournemouth in England, on June 26 1919. On his eleventh birthday, he received a pair of boxing gloves and a rudimentary lesson from his brother Charlie.
At the age of 14 he left school and began working as a dairy