Georges Carpentier the greatest European fighter of all time

Georges Carpentier nicknamed the “Orchid Man” was possibly the best European fighter of all time and virtually fought in every division, but he is best known for his fight with Jack Dempsey at Boyles Thirty Acres in Jersey City on July 2 1921. 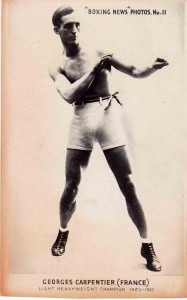 Many journalist referred to it as the ‘the match of the century’ and Grantland Rice described the match-up as “the greatest single day in the in the ancient history of an ancient sport”.

On October 12 1920 Carpentier had his first fight in the United States when he knocked out Battling Levinsky in the fourth round to win the world light heavyweight title which set him up for a challenge against Dempsey for the world heavyweight crown.

The fight became a big social event and amongst others John D. Rockefeller, Henry Ford, Teddy Roosevelt Jr. Al Jolson and Tom Mix were at ringside.

Promoter Tex Rickard had built the largest of his great pine stadiums and a crowd of 82 000  attracted gate receipts of $1 789 238 for boxing’s first million dollar gate.

Carpentier a World War One hero, served as an aviator and was awarded the Croix de Guerre and the Médaille Militaire, two of France’s highest military decorations.

He entered the ring first against Dempsey, as a brass band played “La Marseillaise” to an overwhelming reception whereas the unshaven Dempsey climbed into the ring amongst jeers and cries of “Slacker! Get outa there, ya bum!”

When some ringsiders saw the American flag sewn on the waist of Dempsey’s white trunks they threatened to rip the flag of him.

At the time Dempsey was considered a slacker by many Americans for not enlisting in the  forces.

Even though he was outweighed by 9 kilograms, Carpentier felt he was in with a chance against Dempsey because of his big right hand and hand speed.

However, it was not to be, as after he broke his thumb and also stunned Dempsey in the second round he was smashed to defeat and knocked out in the fourth round.

He lost the world light heavyweight title under controversial circumstances in September 1922 when he was knocked out in the sixth round by the Senegalese Battling Siki.

After the Siki defeat he had another nine fights which included a creditable performance against future world heavyweight champion Gene Tunney, before being stopped in the fifteenth round.

He finished with an outstanding record of 88 wins, 14 losses, 6 draws and 1 no contest.

After retiring from boxing Carpentier appeared as a song and dance man in vaudeville in England and France and also appeared in a number of films; and at one time owned an upmarket bar in Paris.

He died of a heart attack in Paris on October 28 1975 at the age of 81 and was buried in the cimetière de Vaires-sur-Marne, Seine-et-Marne, France.

Carpentier was inducted into the International Boxing Hall of Fame in 1991.