A Brief History of Boxing 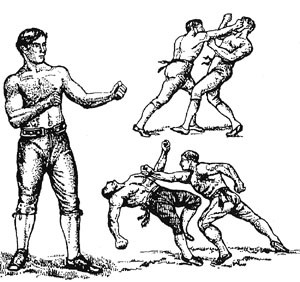 While amateur boxing has been around since time immemorable (even dating as far back as the Olympic games in 688BC), The sport started to come into its own as a professional practice in the 1800’s. Since then, it has been established as one of the world’s most dominant martial sports and as a global one, it generates some $236 000 000 every year. It has become a solid part of nearly every culture in the world; captivating audiences and pushing athletes into the spotlight of the ring, creating champions every year.

But let’s take a glance backwards for a moment to see how far this sport has come; how it has grown in both popularity and professional structure over the many years it has been around.

As far back as 600BC, the ancient Greeks believed that the Gods of Olympus engaged in competitive fighting, and as such, included them in the Olympic games. Of course, all the way back then, the sport was vastly different.

There was a lot more contact, pretty much no regulations, and nothing but leather straps for hand-wrappings. This practice continued on into the Roman Empire during their rise (since they adopted many cultural activities from the Greeks they had conquered), though sadly the sport took a slumber in the annals of history after the fall of the Roman Empire.

Though modern athletes can be glad for this. In both Greek and Roman matches, bloodbaths and even fights to the death were a common spectacle of the sport.

During the industrial revolution, the working-class man found entertainment in boxing as it made a comeback. Although it was far less bloody and deadly than the sport as it was practiced by the Greeks and Romans, it would still be some time before the sport had any rules besides ‘last-man-standing’. Bare-knuckle contact was the order of the day, and there were no points or technical knockouts. You won when your opponent couldn’t go on anymore.

Jack Broughton and the Bare-Knuckle Era

In 1743, heavyweight champion, Jack Broughton, began drawing up his own rules for the sport. It started limiting types of contact (blows below the belt, arm-locks and kicks) that made the sport more dangerous than it needed to be. He also insisted on a square ring instead of a round one, another change we have gotten used to. This era of boxing brought about by Broughton became known as the bare-knuckle era of boxing.

The Marquess of Queensberry

In 1866, boxing began to take on the shape that we know today when rules instilled by the Marquess of Queensberry insisted on the use of gloves, limited rounds to 3 minutes each and removed the wrestling aspects from the sport. This slowly changed the sport to the point where the last ever professional bare-knuckle fight was exhibited in 1892 between James Corbett and John Sullivan, with Corbett as the winner.

From there, weight classes began to be drawn up and diversified to create a new system of competition in the sport. And although much of the sport’s original brutality had been lifted, it still came under constant fire and risk of being banned due to its brutal nature. In fact, boxing as a sport came under heavy fire in the 1980’s, following the death of Duk Koo Kim of South Korea in 1983; though since then the sport and its techniques, safety regulations and ringside medical facilities have come a long way to protect the health and performance of athletes; making boxing what we know it to be today.

IF you would like to learn more about this great sport, and the legends who have kept it alive throughout the years, visit the African Ring Magazine website for further information about boxing.