Knockouts Galore At The Palace

Jeff Ellis of African Ring in conjunction with Rodney Berman of Golden Gloves provided plenty of hot action with seven knockouts in eleven fights at the Emperors Palace near Kempton Park on a hot Gauteng Sunday afternoon.

In the main bout Deejay Kriel (48.72kg) scored a hard-earned unanimous six round points decision over the gutsy Kotle Morapedi (49.00kg). Even though Morapedi was knocked down from a right to the jaw in fourth round he came back well forcing Kriel to use all his boxing skills to keep the marauding Morapedi at bay. Kriel improved his record to 8-0; 4 and Morapedi dropped to 4-4.

In possibly the best fight of the afternoon Xolani Mgidi (61.55kg) upset the more fancied southpaw Lucky Mongebane (59.32kg) when he won on a majority four round points decision. The bigger and heavier Mgidi proved to be that much stronger which gave him the edge and the decision. The scores were 39-37 twice and 38-38.  They were fighting at lightweight.

After a slow start junior bantamweight Joshua Studdard (51.90kg) landed a short right hand to the jaw of Mthobisi Nkosi (49.86kg) to win on knockout after 1 minute 57 seconds of the first round.

In the opening bout of the afternoon Anthony Moloisane (57.52kg) outpointed Nyiko Ndukulu (56.92kg) over four rounds in featherweight bout. 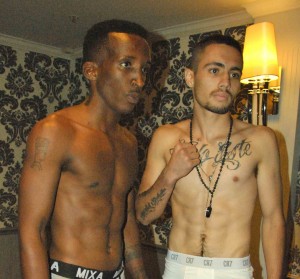 It was pleasing to note that there was a crowd of possibly 1500 in attendance which augurs well for future prospects tournaments.